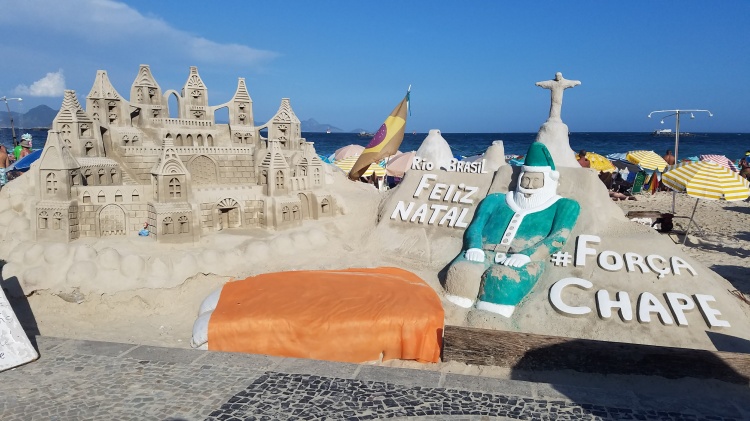 As long as I can remember I swore I would never miss a Christmas with my family at home in Colorado.

But, here I am, at a hostel in Sao Paulo, Brazil, after a long day of traveling from Iguazu Falls. It’s Christmas Day.

When I was a kid, the thought of being away from my family on Christmas never crossed my mind because I was obviously living at home. But even when I went out of state for four years of college and then moved to California for a job, I knew I’d always be going home for the holidays. And even when i had a serious boyfriend of 2.5 years, there was still no question that I would be with my family at Christmastime.

I grew up with a tradition of celebrating on Christmas Eve and Christmas Day. Christmas Eve was what my siblings and I looked forward to the most because it meant “party hopping” until church, finger foods and snacks for dinner, presents!, staying up late and slumber party at grams and gramps’ house. We even got to open presents from Santa that night. Christmas day meant sleeping in, playing with the toys we received, a proper christmas “dinner” at 2ish and board games into the evening.

Our tradition was largely built from the fact that my dad didn’t have living parents to spend the holiday with and my mom’s only married sibling devoted Christmas Day to his in laws. Our annual tradition just worked for our small family, and us kids loved it. I never wanted it to change.

But as is often the case, things started to change. One year in high school, my dad proposed that we start going to the 5:00 service instead of our normal 7:00. We had pared down the number of friends we visited before church and my new cousins (from the married uncle) didnt need to be up late the night before going to visit the other side of the family. It just made sense to go  to church earlier. I, on the other hand, was livid. I can’t honestly tell you why, though, aside from the fact that it was change. It disrupted our beloved annual tradition. “Thats not how we do it,” I cried. I probably even told my dad i hated him.

I eventually got over it, but I still blamed my dad for ruining Christmas that year.  Meanwhile, everyone else (i.e. the adults) was very happy with the change.

In college, Christmas changed because my dad had started drinking (though we didnt know it at first). I came home for the holidays a couple years to someone who was not my dad: he was acting weird, being especially argumentative, experiencing odd health issues and even falling. I remember calling my boyfriend and crying to him that dad had ruined Christmas again.

Dad was in and out of the picture at Christmas in the decade following as he often opted for the bottle over his family. During his sober stints, grams would invite him to join, but it was incredibly awkward. We all refrained from drinking, which had become part of the tradition as we all came of age, and we watched his every move to make sure he wasn’t sneaking alcohol from my grandpa’s well-stocked  cupboard in the kitchen.

After moving to California, I still looked forward to going home for Christmas, even when I had zero vacation days having started a new job just two months earlier. I bought an overpriced plane ticket and went home for a long weekend.

Not too long after that, though, drama in other corners of the family started boiling over. My mom, her siblings and the wife who married in would go through bouts of fighting, jealousy and shit-talking behind backs. At one point my aunt in law didn’t like our family (maybe she still doesn’t). Then my blood aunt started getting sickly jealous of my mom. And all the while mental problems plagued at least two of them.

I know every family has its disfunction, but ours has gotten bad and the sibling drama has really started affecting the rest of the family.

Last year, was the first time I was confronted with the idea of not spending Christmas with the whole family. My sister and brother brought it up in a group text message. I immediately felt the same way I had 15 years early when my dad proposed changing Christmas. I hated that they were putting me in this position. I didnt want anything to change. As my eyes welled up, I shot them down and then excused myself from the conversation.

Later my mom brought it up, sensitively proposing that we try something different. I wasn’t happy about it, but finally accepted that I was outnumbered and it didn’t make sense to force people to be with each other on Christmas when they didn’t want to be. I reached out to my friend whose family has an annual party on the 24th and invited myself there. I told her the family might be in tow.

In the days before Christmas Eve I ended up finding out through a sibling that my mom had chickened out on her own plans to skip the annual Christmas tradition and would actually be there Christmas Eve. What’s more, it had been communicated to everyone, including the grandparents and cousins I adore, that “Lindsay won’t be here for Christmas because she’s going to a party.”

Once again, I was livid at Christmastime. I didn’t want to change plans to begin with but felt cornered and had decided it was for the greater good.

In the end I went to my party, with siblings in tow, and recorded that as the first Christmas (Eve) that I wasn’t with my (whole) family.

Looking back, maybe that was the transition away from my beloved holiday tradition that I needed considering I didn’t spend Christmas Eve or Day with my family this year. Or maybe I subconsciously planned my international sabbatical over the holidays on purpose because of how unconfortable and drama-filled Christmas had become.

Aside from missing my family, I’m not too bummed to have missed being home for the holidays. The fam went back to the tradition and all the aunts and uncles were pleasant in my brief FaceTime chats with them on Christmas Eve. It all seemed to go off without a hitch this year, which I’m sure makes my stressed grandma happy. She had all her family under one roof for the holidays again, except me.

Last night I was at a hostel in Foz de Iguazu (my first night in Brazil). It’s summer, so I was dripping sweat in the under-air conditioned lounge. I had walked to the main part of town and treated myself to a steak dinner and bottle of wine. Other Christmas Eve dinner options included sushi or Pizza Hut.

This morning I visited the Brazilian side of Iguazu Halls. I had toured the Argentinian side yesterday, but today’s views were equally magnificent.

There were a lot of people there – away from their families for the holiday – and the summery, tropical weather did not evoke any wintry, festive feelings. It did not feel like Christmas. In fact, it hasn’t really felt like Christmas at all this year.

I have been traveling for nearly two months and have hardly seen any holiday decorations. No houses were decked in lights, no stores appeared to be having holiday specials and Christmas music was nowhere to be heard. The exception was a fancy malls in Buenos Aires. A three-story tree sponsored by Carolina Herrera stood in the middle surrounded by other decorations and a “picture with Santa” station. These were the only indication that Christmas was around the corner.

It was good to be reminded that it’s Christmastime and experience a little festivity, but it also reminded me that it was all I had this year. Yeah, it rarely feels like Christmas in warm SoCal, but I always had my family and snowy Colorado to go home to.

This year, Christmas was a Spanish-speaking Santa at the mall, a Brazilian steak dinner by myself, a day-trip to the amazing Iguazu Falls and a FaceTime chat with my family. Sure it’s not the Christmas I imagined as a kid and it’s far from the tradition that I tried to hold onto so tightly, but it’s a Christmas I’ll remember and cherish forever. I’ll probably never have another Christmas like it.