Reducing a 40 pound pack to a 6 kilo duffel bag.

It was really interesting to see how many Peruvians and other foreigners were invested in the election and largely how it turned out. Obviously, none of them wanted Trump in power. Yes, obviously.

While I was out and about on the 8th, mildly kicking myself for forgetting to send in my absentee ballot before I left, hostels were hosting election watch parties and folks in bars were glued to their phones watching the results come in into the wee hours of the night. 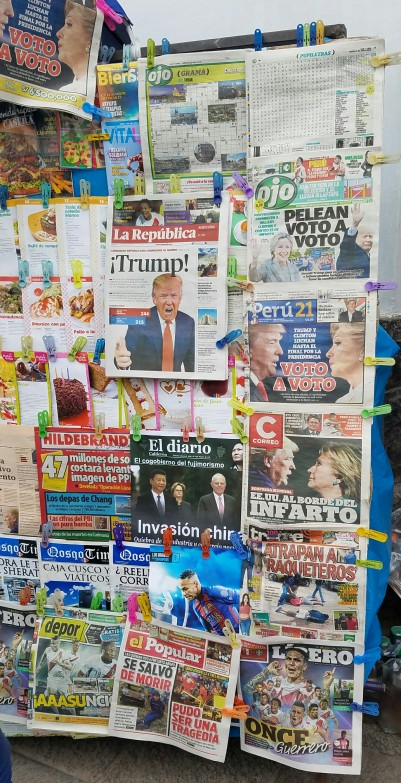 As my new friend and I left bar #3 at nearly 2 am, a Cusquaño came running up the stairs and flashed his phone with the current polls in my face. “Of course he shows me that, because I’m American,” I said to my friend.

“He doesn’t know you’re American,” he responded quickly in his darn good English. “That’s not why he showed you. If Trump becomes president, it affects us too. All of South America.”

More than once over the past week I’ve heard that if Trump becomes PotUS, there will be a war. I know enough about what Trump stands for to know that he is not good for our country, but I didn’t even think about other countries. And to think war is one of the many negative things they see coming from him.

I started kicking myself a little bit harder after that. Because I didn’t vote, I have no right to complain about him over the next four years. But at the end of the day, Hillary won California, so my vote against Trump wouldn’t have made a difference.

Something that would have mattered (much smaller scale), is if the trekking company I booked for the four-day Inca Trail trek told me in advance that I’d have to reduce my 40-pound pack, plus carry-on backpack, down to 6 kilos.

Other guides (legally) allow 15 kilos for their porters, and I assumed G Adventures was the same. Nope. They informed us the night before we left, so I was up late unpacking and repacking my bag, making numerous trips down to the lobby to weigh it on the community scale. In the process I managed to lose a shirt (personal belonging #2 thus far) and laid awake all night stressing about not having the right things.

No, I don’t need a variety of outfits and shoes and i don’t need all my toiletries and cosmetics, but I am not going back with the group and am instead spending 7 more days up in the mountains after Machu Picchu. I need a bit more than one pair of leggings and 4 pairs of panties, and I really need my pack to carry what belongings I could bring as I continued further up into the Andes. I tried fitting my pack into the duffel, and was optimistic when it only weighed 3.5 kilos without clothes. Turns out, clothes weigh more than you think. It came in at a whopping 10 kilos with only a small selection of my clothes. No matter how much I tried, it was only creeping downward. The pack had to go. So now I’m continuing my Andes trek with a duffel bag, a few bright colored leggings, jackets for the variety of climates we’ll see and my daypack, which is stuffed to the brim.

Do you hear this pity party? You should feel bad for me because a Peruvian porter (who’s probably half my size in both directions) will only carry 6 kilos of my luxuries.

And feel sorry for the US because we have a mean, inappropriate, disgusting, ill-equipped man as our new president. No matter that other countries have experienced that before – and even worse.

My G Adventure guide also reminded me that other countries have their own struggles. No matter where you go, there is hate and oppression and negativity and poverty and crime and on and on. Although the US will likely see more of those in the next four years, we’re not the only ones being negatively affected by this majority decision (still baffles me) and we’re not the only ones dealing with hard times.

Don’t get me wrong, I do think the US is taking huge steps back as a progressive, united country. But the little that I’ve seen of South America so far has opened my eyes to how good we/I have it in the states and how much of what we have is not necessary at all. The communities here work so hard and live with simple, basic things that to them may be luxuries.

So, in 11 days I’ll be reunited with my other 10 kilos and will have to repack for the umpteenth time, and in 4 years we can get a new president. Just as I will manage over the next 11 days, we’ll get by as a country (I hope), and maybe it’ll even bring some of us closer. God bless America, even if the majority have proven to be insane.